Two and a Half Men

Two and a Half Men is an American television sitcom created by Chuck Lorre and Lee Aronsohn that originally aired on CBS for twelve seasons from September 22, 2003, to February 19, 2015. Originally starring Ashton Kutcher, Jon Cryer, and Angus T. Jones, the series was about a hedonistic jingle writer, Charlie Harper, his uptight brother Alan, and Alan's troublesome son Jake. After Alan divorces, he and Jake move into Charlie's beachfront Malibu house and complicate Charlie's freewheeling life. 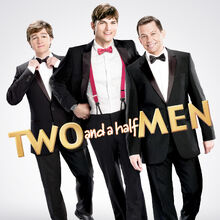 Retrieved from "https://television.fandom.com/wiki/Two_and_a_Half_Men?oldid=74783"
Community content is available under CC-BY-SA unless otherwise noted.