Man with a Plan

Man with a Plan is an American sitcom that originally ran on CBS since October 22, 2016. The series was created by Jackie and Jeff Filgo, who also served as the show's executive producer. The series stars Matt LeBlanc and Liza Snyder as Adam and Andi, respectively, a working class couple living in Pittsburgh, Pennsylvania. 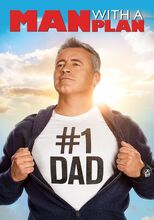 Season 1
Add a photo to this gallery

Retrieved from "https://television.fandom.com/wiki/Man_with_a_Plan?oldid=68310"
Community content is available under CC-BY-SA unless otherwise noted.