"No job is more stressful, dangerous or exhilarating than those of the Firefighters, Rescue Squad and Paramedics of Chicago Firehouse 51. These are the courageous men and women who forge headfirst into danger when everyone else is running the other way and whose actions make the difference between life and death. These are their stories."

Chicago Fire is an American television drama series that airs on the NBC channel (USA) and Sky Atlantic (UK). The series originally premièred Season 1 on October 10, 2012. The show follow the lives of the firefighters and paramedics of the Chicago Fire Departments Firehouse 51.

The show explores the lives of the firefighters, rescue squad and paramedics of Chicago Firehouse 51, the men and women of this firehouse get their fair share or drama and hard work. Caught up in relationships, personal problems and nail-biting events, you rarely witness a dull moment with Firehouse 51. 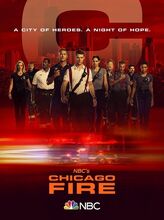 Retrieved from "https://television.fandom.com/wiki/Chicago_Fire?oldid=70852"
Community content is available under CC-BY-SA unless otherwise noted.