American Housewife is an American sitcom television series that debuted on October 11, 2016 on ABC. Created and written by Sarah Dunn and co-executive produced with Aaron Kaplan, Kenny Schwartz, Rick Wiener, and Ruben Fleischer, the Kapital Entertainment–ABC Studios co-production was greenlighted to series order on May 12, 2016. A preview was released on May 17, 2016. On November 4, 2016, ABC gave a full-season order of 22 episodes with an additional episode ordered on December 13, 2016 for a 23-episode first season.

On May 11, 2017, ABC renewed American Housewife for a second season, which premiered on September 27, 2017. On October 31, ABC ordered two additional episodes, bringing the season total to 24. 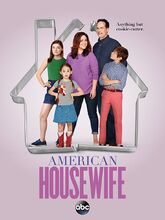 Season 2
Add a photo to this gallery

Retrieved from "https://television.fandom.com/wiki/American_Housewife?oldid=71587"
Community content is available under CC-BY-SA unless otherwise noted.